The distinctive feature of the elements of the original Karl Demetz crib are the many and very elegantly worked out details. This is not only about a vivid facial expression - jewelry and other accessories of the Nativity figures have also been worked out in great detail by his master craftsmen.

All prices are including VAT but excluding delivery

Unfortunately, there are no nativity figures available for this selection.

Please choose a different combination of versions and figure size

Carving wood has been elevated to an art form many centuries ago. Some people have their very personal ideas, pictures or even visions when looking at certain objects. It must have been like this or similar with Karl Demetz. Already in his youth he felt clearly that this artistically difficult and demanding profession would be his way. Consequently, he attended art school and worked in various master workshops. Immediately after his master's examination, his decision to become an independent sculptor was clear. He created his own individual and artistic program in Val Gardena. Complete collections were created.

Especially in his religious motifs he found to a beautiful line management, which corresponded to the lavish and extravagant baroque epoch. In the last 30 years nothing but pure quality came from the master business of Karl Demetz. His works have value, expressiveness and attraction. This is how he became a permanent institution in the industry and the scene and his name became well known. His life is the art of woodcarving. He created wonderfully impressive religious figures.

The masterpiece - the crib

So it is not surprising that the original Karl Demetz crib has become a correspondingly high-quality work of art. The wood-carved Nativity sets was created in a classic design. The nativity figures of the Karl Demetz crib are available in different designs. These include the natural version as well as the stained, the glazed or even the crib, some of which are gilded with real gold. It brings The Three Wise Kings to life, creates a lovely and devout holy family and makes the shepherds appear with the most diverse accessories typical of their profession. The Christmas story comes to life.

Our guide answers important questions before buying a nativity scene or nativity figures. 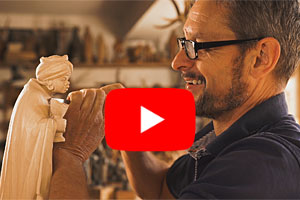 Do you have questions?

Should the items in the shopping cart be adapted to the new characteristics?

Nativity figures should have the same properties so that they fit together.